Around the world, summer is slipping away. But in Orange Country, summertime is not a season– it’s the way of life along this region of the Pacific Coast, a golden age glimmering beneath the sun and clashing with the calming waves of wide beaches dotted with swaying palms. In particular, Newport Beach feels as alive as it did when this seaside port town was the weekend getaway for most of Hollywood’s Golden Age starlets in the 30’s and 50’s. Now in 2018, the town sees locals and tourists flocking to Dad’s Frozen Bananas for a cool treat, bikers on beach-cruisers racing to the finish line at the edge of Balboa Pier, and the yachts that float through the bay past Lido Isle, careful not to collide with the smaller legions of frivolous duffy boats. Besides the today’s Top 40 that sings through the bars and the smartphones out and ready for a photo opp, this charming place is past, future, and present– a getaway that never really got away and stayed true to its roots in the breezy bygones of California dreaming. 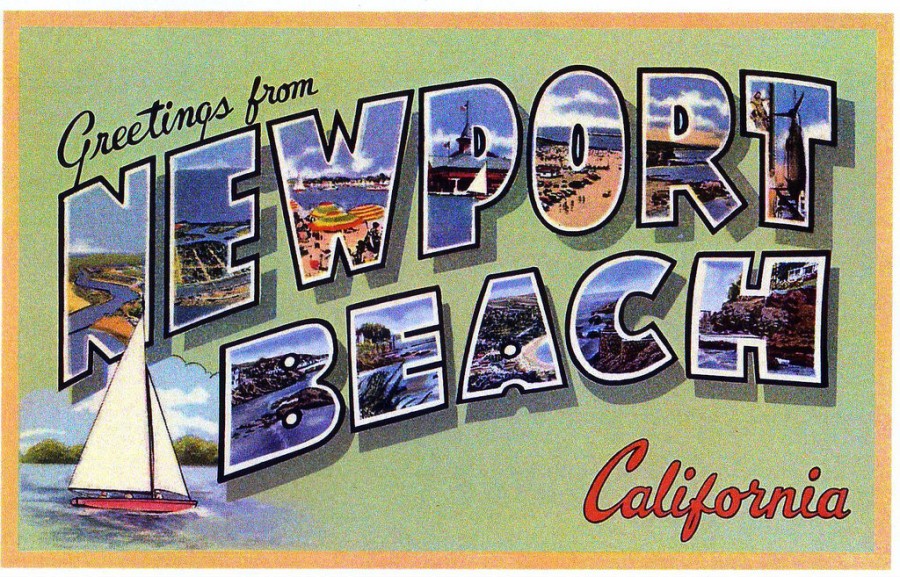 When thinking of going west, feelings of fresh starts and Mid-Century boho vibes might start to come over some. Here in Newport, a fresh start is simply revisiting old comforts that shift your perspective in a new light for inspiration. From the 30’s bungalows at Crystal Cove to a juicy cheese melt from the original Ruby’s on the Pier– these particular sights of the OC’s charmer are just exactly how Newport would want you remembering it.

As evidenced by the photos on the hallways to the resort’s grand ballrooms, legendary starlets like John Wayne, Lauren Bacall and Humphrey Bogart, and Natalie Wood all came and went through Balboa Bay’s waters. Founded in 1948, the club is a renowned cornerstone for West Coast sailing culture, and in 2003 expanded next door into an opulent 160-room hotel. Sip a piña colada by the poolside or take in an Anaheim Angels game on the big screens of A&O Bar & Kitchen while the boats sail by. At night, you can even take your glass of red from the Waterbar restaurant back to your room after dinner and enjoy the harbor lights from Lido Isle across the bay as you sit on the balcony.

Scattered throughout the city on land and sea, Duffy boat rentals are an adventurous way to see Newport Beach. At 5 miles an hour these little cruisers are easy to navigate and can accommodate up to 10 people per ride, perfect for a small party on the water comparable to Venice canals or Nantucket shores.

Rentals vary from $70 – $88 an hour, see more at duffyofnewportbeach.com

When founder Doug Cavanaugh was jogging along the beach in 1980, he saw the potential of a 1940’s inspired diner that could revive the old fishing shack at the edge of Balboa Pier. Now with 35 operating restaurants across the States, a bite at Ruby’s Diner feels like a delicious blast from the past! Dedicated to the authenticity of the diner’s roots, Cavanaugh and his co-founder Ralph Kosmides scavenged around Southern California looking for memorabilia and artifacts of the decade. As for Ruby herself? She is wonderfully stylized and named after Doug’s own mother!

A hot-weather delight on a warm afternoon, Newport’s Balboa Island is world famous for giving the world frozen bananas. The original stand on the peninsula from 1940 may long be gone, but the legacy and delicious treat lives on at two rivaling locations that operate alongside each other– Dad’s, and Sugar ‘N Spice– that are always ready to give to passerby’s their customized creations of chocolate-dipped fruit with sprinkles or nuts or everything in between!

Get your fixings at 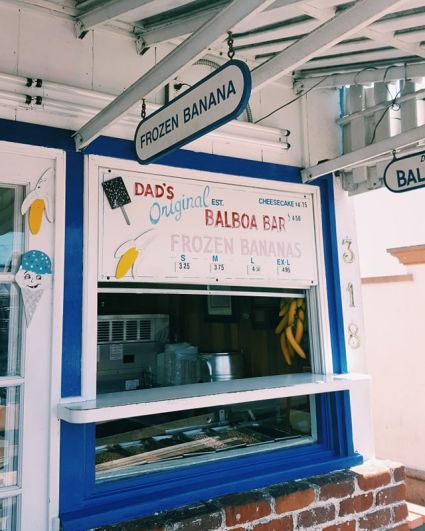 Perfectly hidden from the Pacific Coast Highway where Newport Beach becomes Laguna Beach, 46 craftsman cottages lie in leisure on the beaches of Crystal Cove State Park. This enchanted cove that is only reachable by foot is as if the secret community that once flourished there in the 1920’s never left at all. Besides the sprawl of white sands along the deep blue waters, feet away from the beach are 22 restored cottages still functioning as intimate vacation rentals you can reserve yourself through the CA National Park system, like any other campground in the Golden State. It sure won’t disappoint, with endless views of the Pacific, an interactive museum, and a few good drinks down at the central Beachcomber Cafe that still swings in Martinis and Big Band songs across the bar and dining deck. 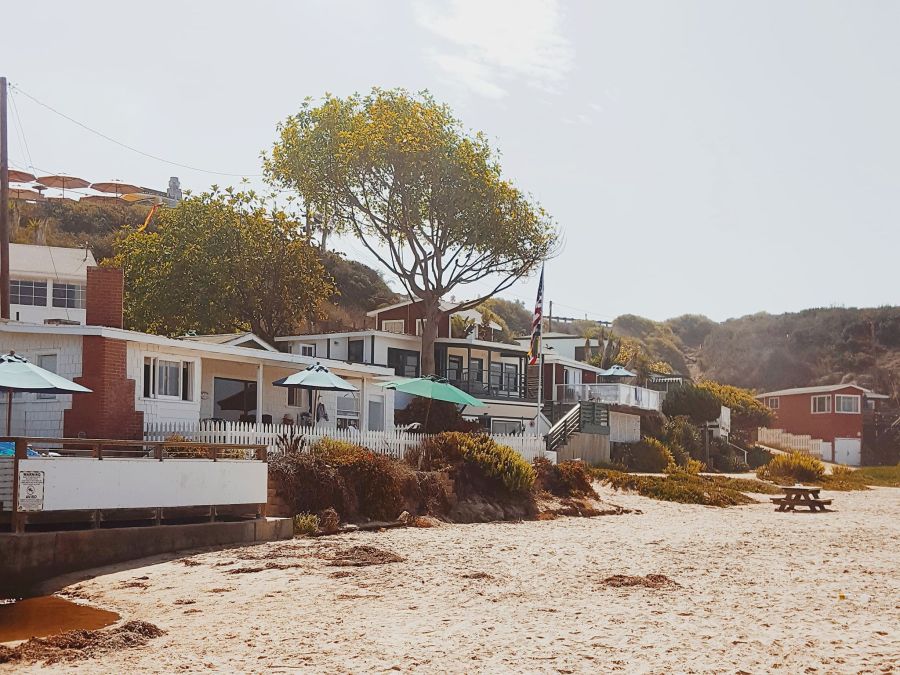 Off to the North Beach side lie in waiting, are the remaining rusting and weather-beaten cottages that are the subject of the Crystal Cove Conservancy’s latest and most ambitious project yet– to restore them to their glory with the aid of $5 million by this October. For any generous contributions, you can donate to the cause here.

Learn more about the cottages and reserve a cottage for your own vacation at crystalcove.org.

Since 1997, Swellegant continues to carry the most adventurous and unique range of clothing and accessories from the 40’s to the 80’s. You’ll find just what you’re looking for from day wear and high-end exclusives, and even if you’re not able to visit their mint storefront in Newport, you can still shop their online Etsy store.

California’s oldest waterfront amusement park is still thriving in 2018 as it did in 1958, bustling with arcades, shops, and seafood cafes that line the Balboa Bay Boardwalk. For the best views, hop on a boat for whale watching tours or take a seat onto the ferris wheel for an areal glimpse of the city. Reduce getting out to the peninsula where Fun Zone is located by taking the ferry from Balboa Island for $1 instead of driving.

See what entertainment awaits at visitnewportbeach.com

A local favorite, Mama D’s is more than a hearty and intimate Italian restaurant– it’s family. From the moment you find yourself waiting outside where servers constantly buzz around offering garlic bread and pasta samples and even glasses of wine while you wait, hospitality is the heart and soul of this vibrant place. Rated the best Italian restaurant on Yelp, we can vouch for the parmesan, namely the veal and shrimp varieties. Although founded in 2005, Mama D’s has already cemented themselves as a world class cuisine of Italian finery when it comes to the taste buds, something classic and quite frankly, hard to leave in the past. 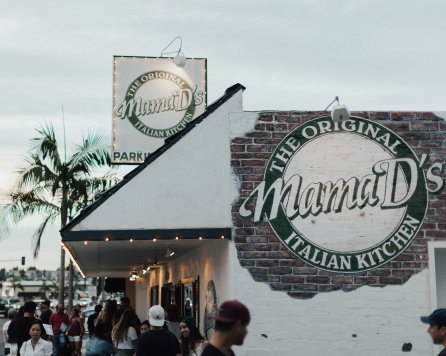 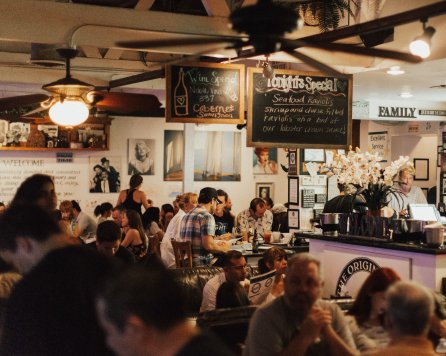 Stop at Mama D’s for your next dinner plans at

And see the menu online at mamadsnewport.com

2 thoughts on “A Week in Newport Beach: The OC’s Unchanged Charmer”