Being a fashionista, I always want to know what’s in style. But I constantly look to icons like Twiggy, Audrey Hepburn and even the present-day Lana Del Rey for fashion advice. Although, I am constantly curious about fashion in the olden, golden days, when people (like our parents) weren’t blessed with certain technologies or privileges that we have in the twenty-first century. So, I spoke with ‘M,’ a Rhode Island educator and marketer in her early-sixties, about what the fashion was like in the mid-late ’60s to early ’70s.

The truth is, no one really becomes aware of fashion trends until a certain age. For M, it wasn’t until sixth grade. What was trending in 1965-1966? Skirts were above the knee and kilts, knee socks, loafers, and button-down collared shirts were a ‘big deal.’ It was essentially, all about looking “preppy.”

“By the time I got into eighth grade, we really got into the ‘Mod Look’ – the ‘London Look.’ Mini-skirts, Twiggy was all the rage,” said M. Who was Twiggy? The first ever supermodel.

“Mary Quant was the designer that everybody wanted to be and wear,” M continues. Trending also were big bold prints and colors, hip-huggers and boots. “The Mod Look was the ultimate fashion goal.”

This period was also a time for fashion revolution and rebellion, and let’s just say some of the trends didn’t exactly “fly” amongst school administrations, like mini-skirts. “But even in high school, we still had dress codes. You couldn’t wear pants to high school. We were two years in high school when we [young women] could finally wear pants to school. You had to wear dresses and skirts and they had to be of a specific length. If they were above your knee, they couldn’t be any more than four inches above the knee.”
In the late ‘60s, fashion became more counter-culture and more about the Bohemian looks, otherwise known as “hippie fashion” came into style. With that, came the infamous bell-bottom jean, especially embroidered bell-bottoms. “If you didn’t have [embroidery] you put it on there yourself!” says M. Poet-style shirts also came into the spotlight. “Everything was a ‘low-rider’ at that time. Everything was a hip-hugger. There were no mom-jeans, well, there were, but as a kid you certainly didn’t wear mom jeans!” M says laughing. “Two-three years later, as dress codes became politically incorrect, you could not tell kids how to dress, it was an infringement on their rights.”

So, what conveniently came into style? Hot pants! Hot pants were worn with tights, but they were worn year-round instead of dresses and slacks. “They were made from summer fabrics to heavy fabrics like wools, etc. And you wore them with everything from sweaters to whatever you wanted, essentially.” This was during the anti-Vietnam War era, where there were factions in schools (Greasers, Hippies, etc.). “The smart people could fall into any category.” This was the age of Woodstock, as well.
“Four years later I was in college [in the early ‘70s] and by that time [the trend] was disco. Bell-bottoms became almost a palazzo.” The early ‘70s was the age of clubwear and big jewelry, especially if you were going out on the town, or just simply overdressing. Bell-bottoms then evolved into straight-leg jeans. “Socially speaking, everything changed – from the music to clothing to politics. This was the era of Nixon, who eventually (obviously) had to resign.” It was also the era of casual-wear. The ever-popular velour running suits came into play – before Juicy Couture ever came out with their notorious velour running suits, and before Juicy Couture even came to be!

“The brand names at the time were designer jeans, like Gloria Vanderbilt. Members Only was a big designer name for guys. For casualwear it was Adidas [and others.]” Designer jeans were such a big deal that filmmakers made a movie out of them!

In terms of shoes, in 1972, Earth Shoes were popular. “Shoes went through their cycle, from the rounded toe, the squared-off toe, chunky heel, no heel, platforms, no platforms. I remember in junior high everyone was wearing chukka boots and you wore them with everything, even though they looked absolutely absurd.” 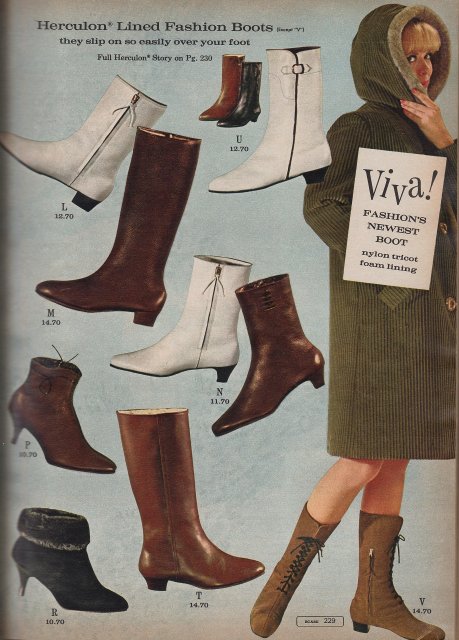 M also grew up in the time of Go-Go Boots. What were they exactly? Go-Go Boots had a flat sole, if they had a heel it would have been less than two inches and square-shaped. They came up to about mid-calf. “If they were truly cool, they were only white.” That is the classic Go-Go Boot, according to M. “They were only called Go-Go Boots because the Go-Go dancers wore them.” These were just another part of the Mod Look and Mary Quant influence.

In short, if you were truly on trend in the mid 60’s to early ‘70s, these were what you would wear during that time. Just like history repeats itself, fashion repeats itself, too! You see things like the square toe coming back in style, along with prints like polka dots. So if you’ve ever sat down snooping through your parents’ yearbooks making fun of their outfits, don’t, because what they wore at that time could come back in style and like me, you could wound up appropriating your mom’s vintage clothes!

April Federico is pursuing her Bachelor of Fine Arts in Creative Writing with a minor in Arts Management at Roger Williams University. She loves all things fashion, food, and of course, writing. She’s been spending this past summer interning at Rhode Island Monthly and writing poetry in her spare time. She owns her own fashion and lifestyle blog, The April Diaries.