Classic, black and white films perfectly capture the Holiday Season. They’re perfect in their cheesy, simple, and heartwarming feel-good presentations set in a world completely ascending our own tech-laden, fast paced and commercial way to celebrate the most wonderful time of the year. We escape from the things meant to make the time easier into a time that was just that in itself. But of course, we’ve seen Miracle on 34th Street and Wonderful Life just about every December we’ve lived on Earth.

Something new captivates us this year. One Friday night that week of the Christmas month, a new movie so timeless in its tropes and story plot (and year) was on the Hallmark Channel. Never heard of it before, The Bishop’s Wife (1947). But it was famous, and an unforgettable favorite among Cary Grant’s films– and a dashing and youthful Cary Grant was only a part of it.

In fact, the story of an overworked Bishop being assisted by an angel who brings guidance and happiness back into his life (and especially that the titular character, Julia played by Loretta Young), is all around a marvelous tale. From the beginning, the scene is set for a standard Christmastime scenario– a children’s choir singing around a fiddler on the snowy streets, florists reluctantly bargaining for their scrawny pine trees, and colorless but deliciously animated storefronts depicting pretty hats and Santa’s elves at work. The warmth is there, so why ruin it now with frustration? Any good story cannot be without conflict of course, but little unsuspecting details within dramatic irony can really mess up the movie. So when Cary Grant reveals off the back to the Bishop his true identity, that takes care of that; no longer is the viewer sweating and twisting their fuzzy blanket, yelling at the screen because everyone hasn’t figured out by now what Cary Grant really is… It’s better to know, at least for the audience; it’s Christmas after all, and the only surprise and frustration you really needs is guessing what your present is. 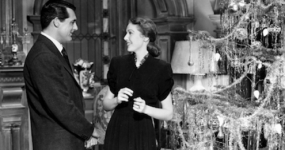 And from there, everything just goes right. Vicious, wealthy widows become feeling and tender, hapless college professors are renewed inspiration to write, and a household is glowing once again as the angel Dudley restores cheer and happiness back into the Bishop’s life. We just love Dudley’s modesty and sweetness through aiding everyone in the film, even down to humble cab driver who partakes in the epic ice skating scene with Dudley and Julia– Julia, who herself begins changing Dudley’s outlook on his own existence.

It’s surprising at how little recognized this film is in comparison to other Christmas classics. Maybe too dry? No complications? The story is well written enough, and with well played comedic elements along with dazzling little special effects. It’s perfect, what a holiday film should aspire to with little plot complication and all the warmheartedness of the season. The message of the movie sticks to you, especially in one of the most ironically depressing times of the year– have hope, for as they say,

be not inhospitable to strangers,

lest they be angels in disguise.

Enjoy heartwarming moments from The Bishop’s Wife below, like this scene between Loretta Young and Cary Grant, here:

2 thoughts on “The Bishop’s Wife: A Favorite and Forgotten Classic Holiday Film”